In 1906, Professor Alexander Saxton (Christopher Lee), is an English anthropologist returning to Europe by Trans-Siberian Express, through the frozen wastes from China to Moscow. With him is the frozen remains of a primitive humanoid creature that he has discovered in a cave in Manchuria and hopes is the missing link in the evolutionary chain. Also aboard by coincidence is Doctor Wells (Peter Cushing), Saxton's compatriot, rival and Royal Society colleague.

A mysterious death occurs before the steam train departs Shanghai -- a thief, having picked the lock to break into the crate, is found dead on the platform bleeding from the eyes, which have turned opaque white. A Rasputin-like monk (Alberto de Mendoza), the spiritual advisor to a Polish Count and Countess waiting to board the train, proclaims the contents of the crate to be evil. Saxton furiously dismisses such superstition and an army platoon facilitates the loading and departure. Saxton's eagerness to keep his scientific find secret has aroused the curiosity and suspicion of Doctor Wells, who bribes a porter to investigate the crate. As the man does, he is killed by the glowing red gaze of the ape-like creature within, which then escapes its confines using lock-picking skills...

The murders continue while the beast roams the moving train, its victims being found with the same opaque, white eyes. An autopsy leads Wells and his assistant Miss Jones to hypothesise that the brains of the victims are being drained of memories and knowledge. When the reincarnate fossil is gunned down by police Inspector Mirov, an authority in charge of the train, the threat seems to have been vanquished. Saxton and Wells discover images retained in liquid removed from inside the eyeball of the fossil's corpse, images that reveal a prehistoric Earth and a view of the planet seen from space. They deduce that the real threat is somehow a formless alien creature that had inhabited the body of the fossil and now resides within the Inspector. The monk, sensing the greater presence inside the Inspector and believing it to be that of Satan, renounces his holy faith to plead allegiance.

When news of the murders on the train is wired to the Russian authorities, the train is stopped and an intimidating Cossack officer, Captain Kazan (Telly Savalas), boards with a small group of his men. Kazan believes the train is housing rebels and is only convinced of the alien's existence when Mirov is discovered to be the creature, which has absorbed the memories of scientist Miss Jones, an engineer and others, and seeks the Polish Count's metallurgist knowledge too, in order to achieve escape from the Earth. Fatally shot by Kazan, Mirov manages to stagger away and the alien transfers itself to the crazed monk.

The passengers flee into the trailing freight car while the monk murders Kazan and his men, and then the Count, draining all their minds. Rescuing the Countess, Saxton manages to hold the monk at gunpoint under a light -- as he has realised that bright light in its host's eyes will prevent the entity from draining minds or transferring to another body. The creature/monk explains that it is in reality an energy being that had travelled from another galaxy with others of its kind, but been marooned. It existed alone for millions of years in the bodies of protozoa, fish and other animals to survive, but cannot live outside a living being longer than a few moments. The creature/monk begs to be spared, tempting Saxton with its accumulated and advanced alien knowledge -- but by this ruse manages to escape, by suddenly animating the dead body of the Count.

Saxton and the Countess flee the creature, but it now resurrects all of its victims as white-eyed zombies. These undead chase Saxton and the Countess back to the rear car, where the survivors have taken refuge. They work desperately to uncouple the caboose from the rest of the train, as the Russian government sends a telegraph to a dispatch station ahead, instructing them to destroy the train by sending it down a dead-end spur. The switchhouse follows this order in the belief the country is at war. The creature/monk assumes the train's engineer position to take over the train, which enters the spur leading to a deep ravine. Saxton and Wells manage separate the last car from the rest of the train, which goes over the cliff to a fiery wreck below, presumably killing the creature and its resurrected dead. The freight car rolls precariously to the end of the track, where the survivors witness the fire consuming the train and the unnatural inhabitants within. 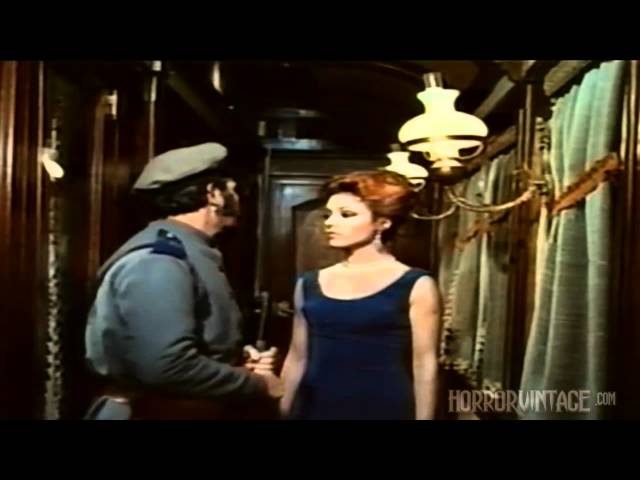